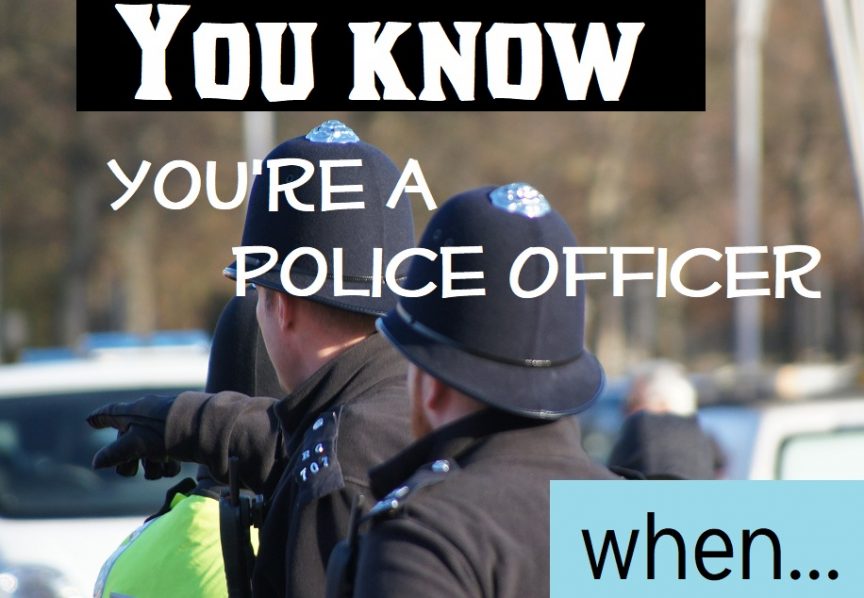 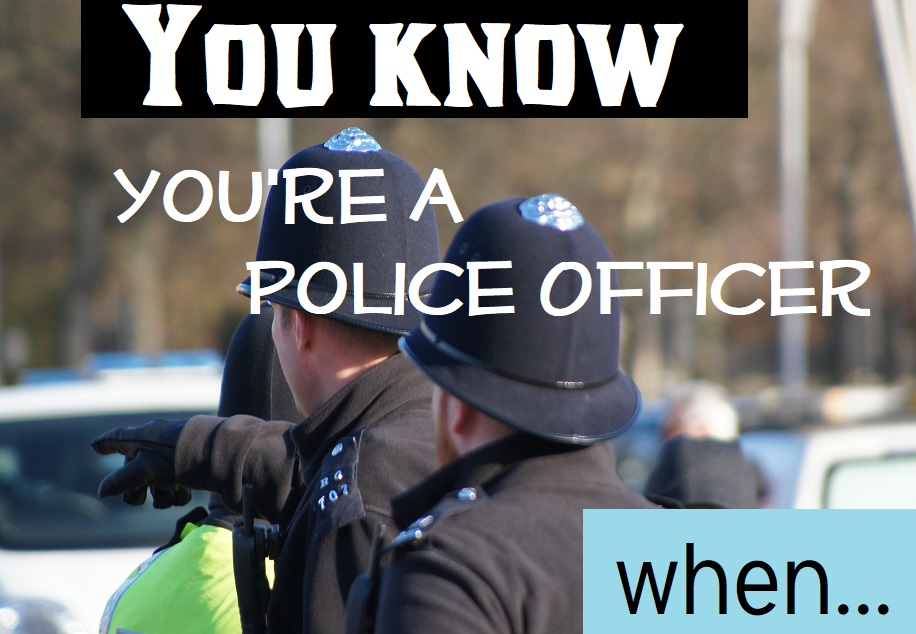 When do you REALLY know that you’re a Police Officer?

Is it when you discover that you have a knack for finding humour in the stupidity of others? Or, is it when you know for certain that unspeakable evils will befall you if anyone says, “I hope you have a quiet night!” Is it when you’ve left more grub on the parade room table than you’ve ever actually eaten, or, is it when you come to the knowledge that discussing bodily fluids and dirty protests over a meal is a perfectly normal thing to do? Maybe it’s that feeling of satisfaction when you hear someone say, “Okay! Okay! You got me!”

Without further ado, take the following test and see how many you can relate to:

You know you’re a Police Officer when…

… Action Plans are rarely lists of things you intend to get done.

… CPS action plans ask you to do things like track down the suspect’s childhood friend to see if they ever mentioned their intentions whilst in nursery.

… you can tell by the tone of the Lawyer during the first 10 seconds of a call to CPS Direct whether they’re going to charge or not.

… when you can rate the ‘quality’ of a job by the information or lack thereof, passed by Comms when they ask for a unit to deal.

… fresh out of Probationer/Student training, the first thing you’re told is; “Forget everything you were told in training.”

… ABC stands for “Accept nothing, Believe nobody, Challenge everything.”

… at some point in your career you’ve said the words “Not pursuing. Following at a safe distance.”

… you have to sit facing the door at every restaurant you visit.

… you’re apprehensive when taking patients back to Secure Units – in case they refuse to let you back out.

… you’re typing up a case file and the lights start turning themselves off.

… you look at Kinder Eggs quite differently to everyone else.

…you’ve looked for yourself on YouTube following an incident.

… you’ve shouted “Get on your knees!” and it wasn’t meant in a sexual manner.

… you’re doing the bleep test and as you hit level 5.4 you hear someone shout; “Right, you can be a normal officer now.”

… you get that one customer who you don’t want to touch – even triple gloved – because their socks have become one with their foot skin.

… a week’s worth of work laundry consists of six T-shirts, six pairs of socks, six pairs of pants and a pair of faded, green-ish looking combat trousers.

… you look at any bank statement to discover you seem to shop exclusively at coffee shops, McDonalds and the 24 hour Spar on your patch.

… you find mugs dotted around the station that have been there so long they’ve actually been painted around, and also have a thriving populace of mould growing inside that would close most businesses.

… you genuinely have first hand experience of a full moon affecting the demeanour of the general population.

… you’re getting dressed for your first day shift and you think to yourself, “Only X more shifts until Rest Days…!”

… you’re the only sober person in the kebab shop.

… you’ve filled a panda with fuel – to experience the utter shame of your fuel card bouncing – always in front of a massive queue.

… you’ve experienced the utter exhilaration of your colleagues bursting through a door following your use of the emergency button.

… you can complete an NCALT for staff safety – yet you have to sit in a classroom for two days being taught how to talk to people.

… you’re asked what time you’ll be home and you can only reply with “When I’m finished.”

… sometimes you’re just SO ANGRY that – mid-rant – you can’t get your bloody words out and get tongue-tied.

… you’ve restrained someone in handcuffs and it was not a sexual experience.

… withheld calls are either work or PPI. Neither are calls that you particularly want to answer.

… you’ve genuinely been asked, “Can I have my weed back? I just paid for that.”

… you grew up with teachers in school telling you that “there’s no such thing as a stupid question” – however, your experience of working as a Response Officer has since determined that to be a lie.

… you discover the sheer horror of what a Drugs Toilet is (and why you’re there) for the very first time.

… you arrest someone at their house and they demand to see a warrant.

… a 19 plate Hyundai i30 is a small boost to morale… tinged with sadness that it’s inevitably going to be worthless before 10k is on the clock and can’t really be used to go up hills.

… you see a night turn ambulance crew at a job at the start of their 12 hour early turn – and then, 13 and a half hours later, you see them at another job as they start night turn.

… you know at least one strange or odd piece of legislation such as the Protection of Badgers Act 1992, and you intend to use it at some point in your career.

… you ring a friend when you’re off duty and start the call with “Are you free to talk?”

… you find yourself instinctively waving to ambulances… Even when off-duty and in your own car.

… you share the same fear as fleeing criminals when you hear “Dog off!”

… you’re offered a seat at a job – glance around & say “I’m okay thanks! Been sat down all night!”

… you’ve had at least one ‘surprise’ bail back during your career.

… you’ve committed the heinous crime of purchasing food whilst in uniform – and you’ve been questioned by a member of the public as to why you’re eating on duty.

… you remand someone to Court for a serious crime – so that the Court can bail them – so that they can breach their conditions – so you can arrest them… and do it all over again.