Your guide to ‘Police slang’ – and a few codewords that the Cops (probably) don’t want you to know!

This simple trick prevents the police from ever giving you a speeding ticket again!

Policing: Is this just how it is these days?

As you’re visiting – why not have a look at our shop? Click the image above or click here!

Don’t need the Police? Think a Lawless society would thrive? Look at this. A stolen digger is used to rip LIDL open and then they try and break open the safe with it. As if that wasn’t bad enough, the scumbags go and demolish the building. The local community must be so proud! Hope they all get jailed.

Let’s be honest, the Police do a pretty amazing job.

It’s the middle of the day. A criminal armed with a crowbar is smashing his way into YOUR HOUSE. You’re absolutely terrified so you call the Police. 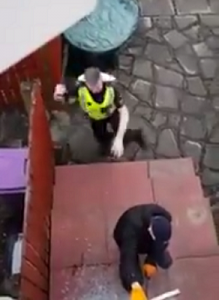 They make their way to the scene and it doesn’t matter WHAT the threat is. They just find a way to deal with it. They’re bloody heroes.
(Hint: Don’t EVER turn to face a copper brandishing a crowbar. They won’t wait to see if you use it!)

A beat bobby has told how GMP is at ‘breaking point’ and struggling to answer 999 calls in a heart-felt resignation letter to Chief Constable Ian Hopkins.

Father-of-three Joseph Torkington, 37, who used to patrol Offerton in Stockport, has resigned after 12 years as a Police Constable.

The picture of him published on GMP’s website which states he is a ‘dedicated local officer’ is ‘beyond misleading, if not entirely fraudulent’, he writes before going on to argue that community policing exists in name only.

He describes a crisis where ‘response’ officers are sometimes not available for even the most serious 999 calls and how bosses ‘give out jobs to patrols that don’t exist’.

It leaves officers ‘being sent to dangerous jobs with little or no back up’ and he reveals he spent his last three years ‘in a permanent state of anxiety’.

He continues: “I’m happy to turn up to any job as long as I have colleagues with me. I’m brave, but I’m not stupid. I have three kids and a glass back, I need back up. I need that reassurance and assistance and it doesn’t exist. So Sir, it is with regret that I see no other option but to resign.”

He concedes to the Chief Constable that ‘you lead us in difficult times’ but delivers a withering judgement on the Coalition and Tory governments which have seen the force slashed from 8,200 officers to almost 6,000.

He concluded: “To the government I have nothing good to say whatsoever, they should hang their heads in shame.”

Mr Torkington emailed the letter to colleagues in Stockport which was then shared on social media.

He told the M.E.N. he had been off at home since March 31 with work-related anxiety and depression.

He said: “I just felt like I needed to be honest. The chief constable needs to know in case he doesn’t know, so he understands. This is probably the biggest decision I have ever made.”

The M.E.N has approached the Home Office for a comment.

I am PC 11834 Joe Torkington. I am currently a Neighbourhood Beat Officer (NBO) based on the J Division.

“When I began this role in late 2009, Neighbourhood Policing still existed. I took genuine pride in walking my beat, getting to know my community and having the responsibility for tackling any problems that came my way. I had great supervision and colleagues and felt valued and happy in my work.

“Unfortunately, as the years have passed, the role has been gradually eroded and marginalised, to the extent I have genuinely struggled at times to understand exactly what is expected of me. Despite remaining an NBO, I have increasingly done anything but Neighbourhood work, yet my photo remains on posters and the like, thus giving the community the impression that they have a dedicated local officer! I actually consider this in itself to be beyond misleading.

Indeed, I firmly believe it was this continuing deception to both staff and the public alike that gave birth to my now deep rooted mistrust of the Government and our entire organisation. Other factors followed further compounding my lack of faith and belief…Windsor (changes to terms and conditions); the Pay Freeze; the demolition of the terms and conditions of our pensions; the heavy cuts to frontline resources; the increasing bureaucracy despite constant promises for its reduction; the constant changes of systems, focus, direction, priorities, shift patterns, teams, geographical beats, policies, process, protocol, all without any apparent benefit to anyone other than those in the upper echelons of the promotion system.

“The result of the aforementioned? Plummeting morale. I can only truly speak for myself, but I am fairly certain my views are shared by the many not the few, that the Police Service is, all clichés aside, at breaking point…

“How some of my colleagues can turn up to work knowing they could be walking into a nightmare alone is beyond me. I have more than admiration for their individual and collective resilience. I would never claim to be the hardest of men, but once upon a time I could do this job well and was not afraid of confrontation. However, for the last two to three years at work, I have been in a permanent state of anxiety and stress.

“Despite what the Government says, this job is all about numbers. I’m happy to turn up to any job as long as I have colleagues with me. I’m brave, but I’m not stupid. I have three kids and a glass back, I need back up. I need that reassurance and assistance and it doesn’t exist.

“So Sir, it is with regret that I see no other option but to resign. I’d love to say I was riding off into the sunset, walking into a well-paid job etc., but I’m not. I’m going to be earning minimum wage and no doubt struggling financially, but hopefully I’ll be able to recover from my anxiety and depression away from what Policing has become.

“I wish all my colleagues of every rank I leave behind, all the luck in the world and they will always have my upmost respect. I nod in respect to you to Sir, I know you lead us in difficult times and I imagine with many constraints and restrictions placed upon you.

To the government I have nothing good to say whatsoever, they should hang their heads in shame.

As for me…what can I say…I am more than a number.”

Deputy Chief Constable Ian Pilling said: “GMP continues to provide the best service it can to the public whilst facing challenging times with less funding, fewer resources and increasing demand. Sadly, this is a challenge faced by police forces nationally.

“It is always regrettable when someone chooses to leave the police service under circumstances such as this. Being a police officer is a difficult job and this is particularly the case in a busy force such as GMP where the complexities create unique demands for our officers and staff, who do a fantastic job day in and day out.

“Despite these challenges, only a small number of officers leave each year through resignation. That said, I understand and accept PC Torkington’s decision.

“We wish him the best of luck for the future. On behalf of GMP and all those who worked with Joe, I would like to thank him for his dedicated service over the past years.”

Whilst you’re visiting – why not have a look at our shop? Click the image above or click here!

This was recently leaked to us – and thankfully it’s not protectively marked. We can therefore give you an exclusive on the newest piece of equipment coming to Met Police Response Officers this Autumn*!

An interesting night shift last night, the shift briefing at 9pm including an input from one of “the old sweats” requesting assistance. Said “old sweat” had recently been “allocated and had attended” the relevant training course for dangerous dogs spoc, and wildlife spoc (not really).
As part of an emerging study and live operation, Officers were asked to provide acr (dispatch/control etc etc) with sightings of urban foxes, as there was concern that increasing numbers of car vs fox collisions is having a significant effect on fox numbers in the 3rd largest city in the UK (Sheffield). All, bar a naive and gullible student Officer, were in on this falsehood, as were the control room staff who, and I quote, were “ready and waiting to really milk it”.

Anyway, all is quiet for the first few hours as said student completes his independent paperwork. The time comes for him to leave the office. Cue “(call sign) to control”
Acr: “Go ahead”
Pc: “Re op fox watch, we’ve got a fox on (road name)”
Acr: “Roger that. We’ll update the log, any further information?”
Pc: “It’s dead, been hit by a car”
Acr (with no wavering in their voice): “Received”

Shift promptly enter a phase of what can only be described as…..hysterical laughter.

Never have I laughed so much, and I’ve been in the job for over 10 yrs.

Disclaimer: said Officer is aware of the banter and at this moment in time does not appear to need either a first contact advisor nor counselling.